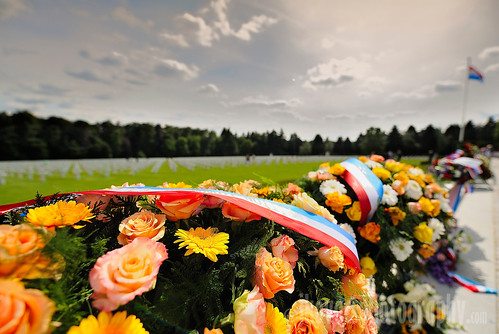 The World War II Memorial honours the 16 million who served in the armed forces of the U.S., the more than 400,000 who died, and all who supported the war effort from home.

I have not managed to get there in time to shoot the ceremony but still would like to show you some of the after events magic. If you want to see more, feel free to visit my Flickr Page..

The Luxembourg American Cemetery and Memorial is located in Luxembourg City, Luxembourg. The cemetery can be found 2.5 kilometers southwest of Findel Airport. It is administered by the American Battle Monuments Commission. Under a US-Luxembourg treaty signed in 1951 the US government was granted free use in perpetuity of the land covered by the cemetery, without taxation.

The cemetery, which is 50.5 acres (204,000 m2) in extent contains the remains of 5,076 American service members. On 22 occasions two brothers rest side-by-side in adjacent graves. Most of the interred died during the Battle of the Bulge which was fought nearby in winter 1944/spring 1945. The 5,076 headstones are set in 9 plots of fine grass, lettered A to I. Separating the plots are two malls radiating from the memorial and two transverse paths. Two flagpoles overlook the graves area. Situated between the two flagpoles lies the grave of General George S. Patton Jr. 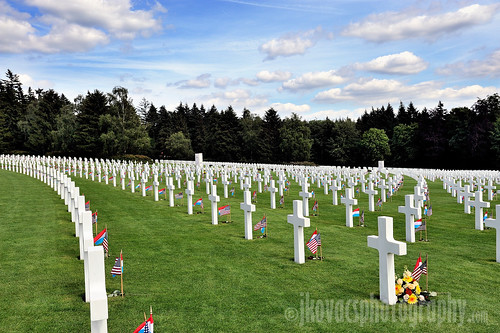 Not far from the cemetery entrance stands the white stone chapel, set on a wide circular platform surrounded by woods. It is embellished with sculpture in bronze and stone, a stained-glass window with the insignia of the five major U.S. commands that operated in the region, and a mosaic ceiling.

The photo below was taken after the official ceremony. 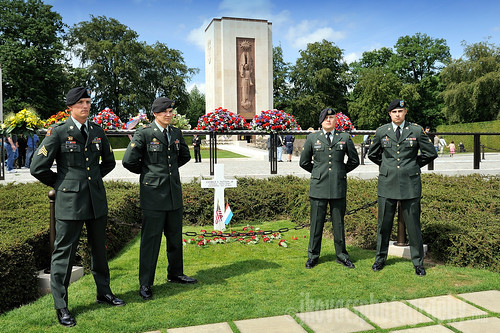 George Smith Patton, Jr. (November 11, 1885 – December 21, 1945) was a United States Army officer best known for his leadership while commanding corps and armies as a general during World War II. He used to command the U.S. Third Army.

General Patton was buried at the Luxembourg American Cemetery and Memorial in Hamm, Luxembourg along with other members of the Third Army, as per Patton's request to "be buried with my men." On March 19, 1947, his body was moved from the original grave site in the cemetery to its current prominent location at the head of his former troops. 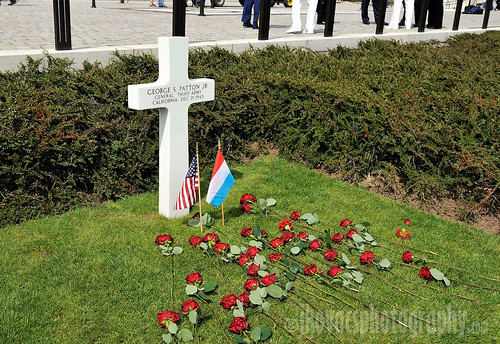